As we mark International Women’s Day 2019 #BalanceforBetter, it’s almost incredible to think that nearly 60 years ago, Dame Stephanie Shirley founded the FTSE 250 technology company Xansa (now Steria) with the goal of creating more jobs in tech for women. Out of her first 300 employees, 297 were women. Fascinatingly, at one point, she even adopted the name Steve, to help her in the male-dominated business world. It worked.

She did all this after arriving in Britain as a child refugee from Germany at the start of World War 11. In 2013, we awarded Dame Shirley the coveted AbilityNet Tech4Good Special Award for her lifetime of using technology for good (a video of her awards speech is below).

She is one of the many great women featured in our awards over the years who’ve achieved impressive successes in the technology for good space. Today we are celebrating them.

This year’s International Women’s Day has the tagline #BalanceforBetter and so while Dame Shirley and plenty of other inspiring women have won Tech4Good Awards, we are reflecting on the fact that there’s still a big push to even-out gender demographics in the tech world. We know there are changes that need to be made to make the tech industry more attractive and engaging to women.

Only around a quarter of people working in STEM (Science, Technology, Engineering and Mathematics) careers are women (2017 figures). But the numbers, interestingly, do look to be increasing for women and declining for men. In 2017, there were 61,430 more women working in core STEM jobs than in 2016. The number of men fell by 45,980 between 2016 and 2017.

Kate Russell, the Tech4Good presenter and BBC Click reporter, is a champion of women in technology. Next month, the award-winning blogger will deliver her ‘manifesto for encouraging more girls to study STEM’ as part of the Eleanor Glanville Centre’s Be Inspired lecture series. 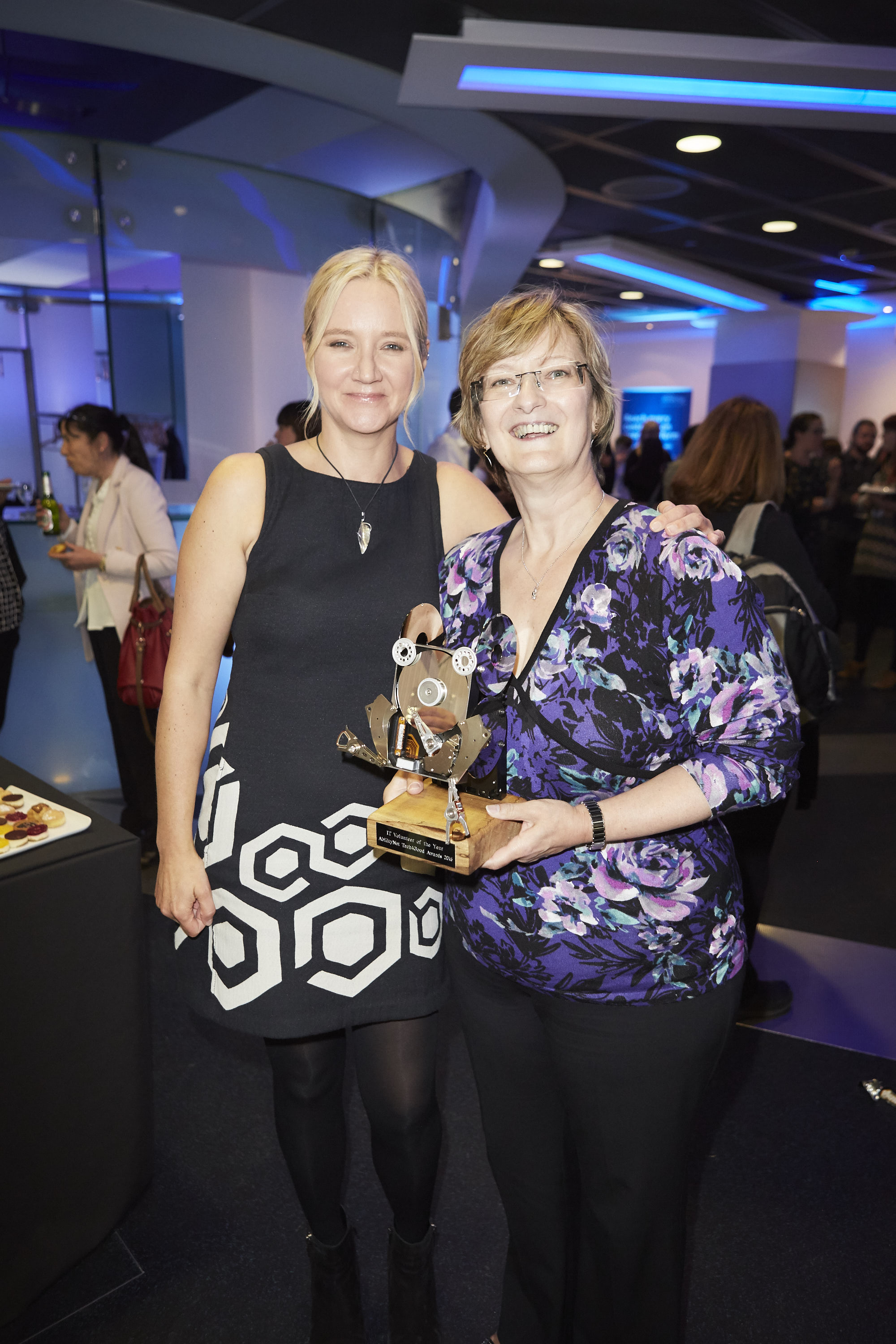 “How we level the playing field for women in tech is a huge question and one I have spent a lot of time pondering,” Russell told AbilityNet. “I think the work being done now in schools and universities will really start to pay off over the next few decades. Girls have equal access to technology and now there are products, games and entertainment platforms that are fully gender neutral. This means more girls will naturally evolve with an interest in technology, but only if we can eliminate the biased thinking of parents, teachers and carers that tend to steer girls towards more ‘traditional’ female roles.

A more recent winner of AbilityNet’s Tech4Good Special Award is Maggie Philbin (video interview below), former presenter of Tomorrow’s World and founder of Teen Tech. She won the prize in 2017.

Though the charity Teen Tech, Philbin encourages young people to understand the opportunities in STEM. When we asked what one thing would help change the landscape for women in tech, she said: “For companies to deploy robust systems for retention of talent …it’s every bit as important as recruitment. And it does mean doing things differently.”

Seeming to echo this sentiment and expand on it, Martha Lane Fox, founder of the huge Dotcom success lastminute.com and patron of AbilityNet, said:  “In my experience you have to look at the entire career of a woman from how she applies to jobs, to how she is appraised, to childcare, to promotions et cetera. And then with each incremental improvement in policy and understanding, we will make the difference.

As we get ready to launch the 2019 Tech4Good Awards on 27 March, we’d love all of our supporters, clients, customers and everyone else to nominate even more of the women that are really making the world a better place through tech.

For some extra inspiration on International Women’s Day, here are just some of the change-making, agenda-setting women who’ve won Tech4Good Awards so far:

Anna Holland Smith is committed to democratising coding education and promoting a more diverse, inclusive and equitable tech workforce. One of her many roles is volunteer instructor for CodeFirst:Girls in Manchester – which seeks to redress the gender imbalance in tech by providing free coding courses to young women from a non-computer science background.

On the future of women in tech, she says: “Perhaps the biggest barrier faced by any woman in technology is the pressure felt by being a minority. When you are the only woman in the room, it is all the harder to feel that you belong.

I truly believe that you can’t be what you can’t see and for that reason I strive to be visible in the work that I do, volunteering my time, sharing my experiences and speaking out in order to challenge problematic stereotypes and to empower women and girls to pursue a career in technology.

The sheer numbers in attendance at coding workshops across the country would suggest that it is lack of opportunity rather than lack of interest that accounts for the low numbers of women entering the profession. A great deal of work is being done by tech companies and non-profit groups to remedy this, so I am hopeful that we will see improvements over time.

What is perhaps of greater concern is the relative lack of visible women in leadership roles in tech. More worrying too is the notion that this absence is being compounded by the fact that the number of women in leadership roles in tech is decreasing. The reasons for this are complicated but one can assume it is because women are leaving the profession and/or are encountering the glass ceiling and not being promoted into these leadership positions.”

Talita Holzer is an engineer with management graduate from Trinity College Dublin and manufacturing engineer graduate from the Federal University of São Carlos in Brazil. She has a history of developing technologies for people with intellectual disabilities. WaytoB helps people with disabilities travel around more safely and confidently.

On the future of women in tech, she says: “From an early age, girls are told that subjects like maths and physics aren’t for us, and that men are more suited for STEM careers because of ‘biological reasons’, which is simply wrong and there is no scientific indication of this. For me, this is the root of the problem, as it constructs an image that is very hard to deconstruct when girls and boys get older. For this reason, I believe we need to support parents and teachers in changing these bad habits.

When young women get to the stage to choose a career, they already have an image of what an engineer, or a scientist looks like, and they find it hard to relate. To address this, we need to showcase more women doing impressive work in STEM and elevate them.

Even after women begin a career in STEM, they find it hard to achieve leadership positions. This happens a lot because the environment is not welcoming for women, so they don’t stay. A lot of bad practices happen in companies, such as not promoting women because of bias, and not offering supports when women have children, for example.”

Founder of TapSOS, a smartphone app that allows people to contact emergency services in a non-verbal manner. Hume is a 2015 University of Ulster graduate with a Masters in Multidisciplinary Design and has completed British Sign Language Level 6​​​​​.​​

One of Rachael Moat’s many skills has involved combining low cost tech solutions with spaghetti to make musical instruments that help give disabled young people a voice. Find out more in the video below.

While doing her GCSEs Alexndria began working on wearable tech designed to identify early signs of breast cancer for the TeenTech National Awards Programme in 2016. It won the Wearable Technology category. On a previous International Women’s Day she spoke to 150 Year 8 and Year 9 pupils about her work with a view to inspiring other young women.

The aid was designed to help dyslexic pupils better understand the alphabet, write letters and spell basic words. The duo did extensive research with young people who had dyslexia to create something which would stimulate a person’s different senses to help them learn. 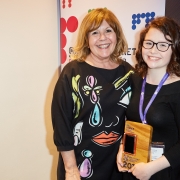 In 2013, Maureen Johnston offered a few days of her spare time to help the newly established charity, The Silver Line helpline with their national launch and to help set up the IT systems it needed for older lonely people. A few years later she moved on to be full-time volunteer director of Information Systems for the charity. Almost single-handedly, she established all of the IT, communications and telephone systems that support The Silver Line’s volunteering activities across the country including implementing the Virtual Call Centre (VCC) solution.
Simone Enefer-Doy, CEO of Lifelites: Winner of the Accessibility Award and Winner of Winners Award – Tech4Good 2011

Lifelites provides specialist assistive and inclusive technology to children in scores of hospices around the UK to help them join in life and games with their brothers, sisters and families. It could be playing games, using a computer, being creative, controlling something for themselves and, most of all, communicating with their families.

Inspired? Nominations will open for Tech4Good soon. Find out more here on March 27.